Gboko Stewart, gboko@journalrage.org Monrovia-Pressure continues to ramp up against the Trinity United Methodist School to reinstate Michael Kanneh following his expulsion from the school. However, the Ministry of Education appears not to be getting involved anytime soon as they have maintained a stony silence on the matter which has kept the Liberian social media abuzz. … END_OF_DOCUMENT_TOKEN_TO_BE_REPLACED 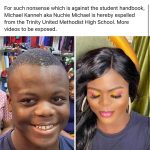 Gboko Stewart, gboko@journalrage.org Monrovia-A video making the rounds on Facebook has led to the expulsion of a student of the Trinity United Methodist School in New Kru Town, drawing ire from the public.   Michael Kanneh, alias Nuchie Michael, 19, was expelled by the principal of the Trinity United Methodist School for dancing in a video which saw … END_OF_DOCUMENT_TOKEN_TO_BE_REPLACED