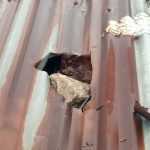 Monrovia-Barely less than a week following a robbery attack against him, journalRAGE’s reporter, Abel Sumo, has come under new attacks at his residence.   Sumo (name changed to protect his identity), 32, was attacked during the early morning hours of August 24 when the roof of his apartment was pelted with a hail of stones by angry youths in his Sinkor … END_OF_DOCUMENT_TOKEN_TO_BE_REPLACED