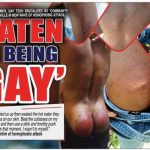 By Gboko Stewart, gboko@journalrage.org Paynesville—Daniel Johnson, Richmond Jones, and Joseph David were returning from a wake keeping ceremony in the early morning hours of Saturday, May 8, in the Gobachop community of Paynesville when they were hassled and severely beaten by members of a community watch team over unfounded suspicion they were gays. Daniel (name … END_OF_DOCUMENT_TOKEN_TO_BE_REPLACED