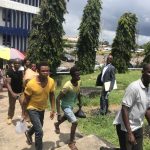 Gboko Stewart, gboko@journalrage.org Monrovia-It has been nearly five months since Dominic Renner and Winston Toe went missing on September 24, 2020, and October 4, 2020, respectively.  There appears to be no end in sight in the case of the missing men. The only clue of their whereabouts lies with Cheeseman Cole, an ex-soldier of the Armed Forces of Liberia who was … END_OF_DOCUMENT_TOKEN_TO_BE_REPLACED