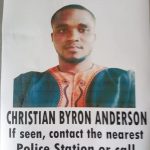 Gboko Stewart, gboko@journalrage.org Monrovia-Christian Byron Anderson, the prime suspect in the murder investigation of John Hilary Tubman, has been found guilty of murder, according to the Inquirer Newspaper.  Anderson’s verdict was read in Criminal Court A, Montserrado County where he had been ontrial for the murder of Tubman. The paper stated that Anderson’s guilty … END_OF_DOCUMENT_TOKEN_TO_BE_REPLACED 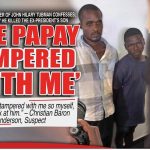 By Gboko Stewart, gboko@journalrage.org Monrovia-Christian Byron Anderson, 29, the prime suspect who has been on the run in the murder investigation of John H. Tubman, said he was tampered with by the deceased, coercing him to retaliate and commit the heinous act.  “The papay tampered with me and myself I went back at him—I went against him,” he said during an … END_OF_DOCUMENT_TOKEN_TO_BE_REPLACED 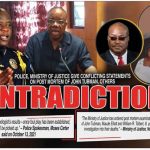 Gboko Stewart, gboko@journalrage.org Monrovia- The investigation into the murder of John Hilary Tubman, one of the sons of former Liberian President William V.S. Tubman, took a twist near the weekend when the Ministry of Justice ordered a post mortem investigation into his death and that of two others who were also discovered dead in their homes in a fashion akin to the son … END_OF_DOCUMENT_TOKEN_TO_BE_REPLACED