Did Ex-Soldier ‘Murder’ Dominic Renner and Winston Toe for Being ‘Gay’?

Gboko Stewart, gboko@journalrage.org Monrovia-It has been nearly five months since Dominic Renner and Winston Toe went missing on September 24, 2020, and October 4, 2020, respectively.  There appears to be no end in sight in the case of the missing men. The only clue of their whereabouts lies with Cheeseman Cole, an ex-soldier of the Armed Forces of Liberia who was … END_OF_DOCUMENT_TOKEN_TO_BE_REPLACED 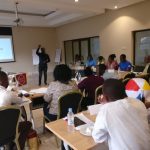 Taboom Media, a global media development and monitoring group, invites you to apply for a spot in our upcoming week-long Media Advocacy for LGBTQI+ Equality workshop. This free and interactive course aims to help civil society organisations from across Sub-Saharan Africa create and implement media advocacy strategies and campaigns that advance LGBTQI+ equality. The course is … END_OF_DOCUMENT_TOKEN_TO_BE_REPLACED

Monrovia-The case of the alleged brutalization and torturing of 27 men over their sexuality by Cheeseman Cole, ex-personnel of the Armed Forces of Liberia, continues to suffer setbacks as there appears to be a grave lack of interest on the part of the Ministry of Justice to prosecute.  Cole has been released on bail filed by his lawyers.  The case, currently … END_OF_DOCUMENT_TOKEN_TO_BE_REPLACED

By Gboko Stewart, gboko@journalrage.org Monrovia-Cheeseman Cole, ex-soldier of the Armed Forces of Liberia has been formally charged and forwarded to court. Cole has been charged with Aggravated Assault, Criminal Attempt to Commit Murder, Possession, Sale of Physical Objects for Lethal Use, Felonious Restraint, and Theft of Property, according to the charge sheet in … END_OF_DOCUMENT_TOKEN_TO_BE_REPLACED

By Gboko Stewart, gboko@journalrage.org Monrovia-A second search of the residence of Cheeseman Cole yielded no results nor clues into the whereabouts of Dominic Renner and Winston Kortee.  On Friday, October 16, a team from the Liberia National Police accompanied by Emmanuel Renner, father of Dominic, searched the nook and cranny of Cole’s isolated home along the … END_OF_DOCUMENT_TOKEN_TO_BE_REPLACED