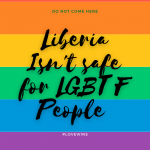 The gruesome murder of the son of a former Liberian President continues to highlight the glaring but often ignored fact that Liberia, Africa’s oldest independent nation, is one of the dangerous places in the world for people who identify as Lesbian, Gay, Bisexual, and Transgender (LGBT).  Liberia is amongst 71 countries that still criminalize same-sex sexual … END_OF_DOCUMENT_TOKEN_TO_BE_REPLACED